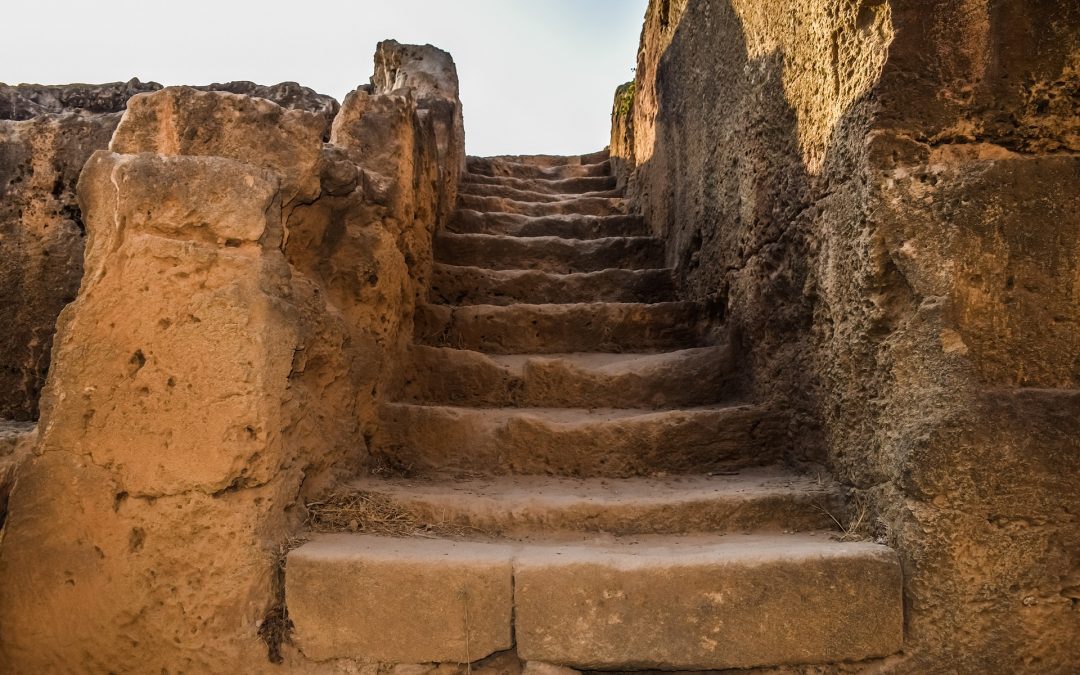 Recently, I was blessed to participate in an exceptional 12-week course on the topic of the Dead Sea Scrolls, taught by Dr. Jeff Hudon, Ph.D. This course was offered, surprisingly, by our church, as an adult Sunday School class (Jeff and I attend the same church). I have never interviewed anyone here on the topic of Archaeology before, but I consider it to be an important part of Historical Apologetics. It is my honor to introduce Dr. Hudon to you, and encourage you to learn more about him and his work.

Dr. Hudon is an Adjunct Professorn of Old Testament at Bethel College and a Research Associate at Andrews University. He has a Bachelor of Arts (B.A.) degree in History and Biblical Studies from Simpson University, an M.A. in Biblical History from Jerusalem University College, an M.A. in Theology from Fuller Theological Seminary, and a Ph.D. in Near Eastern Archaeology and Old Testament Exegesis from Andrews University. He also serves as a Graduate Assistant for the American Schools of Oriental Research and Administrative Director of the Tall Hisban Cultural Heritage Project.

Israel Wayne: What motivated you to pursue Archaeology as a student, and then as a professional teaching career?

Dr. Jeffrey Hudon: I like to describe archaeology as something akin to having a “fifth gospel.”  By that I mean that archaeology, as a science, consistently illuminates the biblical text and continually contributes new, often exciting data to our knowledge of the biblical world.  Observing and participating in this quest is the basis for my passionate interest in this subject.  However, my interest in excavation actually began when, as a young boy, I “excavated” the family garbage dump in the woods behind our home.  The dump contained household trash and rusty machinery, including a 1934 Chevy!  My parents were not amused, but this early experience instilled in me the thrill of discovery as well as revealed information about how my grandparents lived, which became a most important first lesson in my archaeological methodology training; that is, interpreting and gleaning information from finds.

Israel Wayne: What were some of the archaeological finds throughout history that have been the most encouraging to you personally in terms of supporting your view of the historicity of the Bible? Dr. Jeffrey Hudon: One of the highlights of my year is attending the meetings of archaeological societies and hearing papers describing the often thrilling discoveries made during the previous field season.  Consistently, the most important of these finds are ancient inscriptions.  Inscriptions speak directly to us across the centuries and while “the stones cry out,” inscriptions give us an unparalleled window into the biblical past.  While their messages are always too brief, the information they give is priceless and tantalizing for scholars who endeavor to “read between the lines” and complete broken off or otherwise missing words and phrases.  One of the most famous of these is a monumental stele inscribed and erected by King Mesha of Moab, who lived during the ninth century BC.  He boasts about various building projects and conquests, including defeating Israel by capturing the cities of Jahaz, Nebo and Ataroth, annihilating their inhabitants, and taking the vessels of YHWH.  Mesha also mentions Omri, the king of Israel and his son (Ahab) and a recently deciphered reference to the “House of David” is now also confirmed.  Amazingly, the Mesha inscription is paralleled in part by the biblical account in 2 Kings 3!  Undoubtedly however, the discovery and purchase of the Dead Sea Scrolls (ca. 1947-1956), which comprise a corpus of over 900 mostly fragmentary biblical, apocryphal and sectarian scrolls dating as early as ca. 300 BC is the most dramatic and important discovery relating to the Bible in modern times.  Dating up to one thousand years earlier than our oldest copies of the Old Testament, these scrolls have shown that the Bible was faithfully transmitted and remarkably preserved.  And their saga continues!

Israel Wayne: Throughout time, secular archaeologists have often ridiculed the Bible as lacking historical authenticity, citing a lack of evidence for Biblical characters like Pontius Pilate, and King David. Over time, finds have been made that have silenced many of these critics. If you could pick a few key finds, that would help to fill in gaps in the Biblical archaeological record (obviously the Ark of the Covenant is one that comes to mind for any Indiana Jones fan!), which ones would you pick, and why? (i.e. More definitive evidence for David, Solomon, Jesus, a lost city, etc.).

Dr. Jeffrey Hudon: Many of the most exciting recent discoveries relate to the period of David and Solomon so I’ll focus upon them.  However, extended lists of important finds relating to every period in biblical history could easily be made.  In 1993, a fragmentary Aramean inscription found at the Israelite city of Dan gave us the first contemporary mention of King David outside of the Old Testament, which essentially silenced some extremely liberal scholars who cavalierly compared King David with the legendary King Arthur.  A decade later, archaeologists uncovered a fortified military center built by David in the foothills west of Jerusalem near the ancient border with Philistia and overlooking the Elah Valley, where David killed Goliath.  The site yielded an administrative building or palace (albeit poorly preserved), perhaps the earliest Hebrew inscription inscribed on pottery and a model shrine with features similar to Solomon’s Temple.  The pottery and materials found clearly point to this site as Israelite, not Philistine and thus demonstrates that David indeed held sway over a sizable kingdom with significant resources.  Interestingly, the site has not one, but two gates, which is a very unique feature.  In fact, 1 Samuel 17:52 and 1 Chronicles 4:31 mention a town in the vicinity named Sha’arim (literally:  Two Gates)!   Excavations at Jerusalem have also netted many new discoveries relating to the Bible, including remains of a monumental building that is most probably King David’s palace (e.g., 2 Samuel 5:9-11).  Most recently, dramatic finds recovered from the Wadi Feynan in Jordan and the Timnah Valley in Israel have revolutionized our knowledge of ancient Edom and Israel during the 11th and 10th centuries BC, the time of David and Solomon.  Evidence of monumental copper mining operations carried out at these sites, as well as correlating data from other sites in Israel, strongly support the biblical reports that Solomon had access to vast amounts of copper (e.g., 1 Kgs 7).  Furthermore, the current (2017) unpublished excavations at the city of Lachish in southern Judah have uncovered even more dramatic evidence supporting the biblical accounts of Solomon and his successors. Israel Wayne: You mentioned in the class I attended that a good archaeologist will try to leave some of his work unearthed for future generations, with better technology to explore. Can you explain the thinking behind that statement, and perhaps give a good example or two?

Dr. Jeffrey Hudon: Archaeology has come a long way since early excavators hired hundreds of laborers and crudely dug huge trenches across sites in hopes of finding antiquities.  Archaeology is now a very sophisticated, multi-disciplinary science that includes numerous specialists, but it is still a destructive science.  Careful recording of all finds and find spots are necessary because once excavated, the data is lost forever.  The goal is to squeeze as much data as possible, not only from artifacts, but also from all the organic material recovered from the tightly controlled excavations conducted today.  As technology continues to rapidly advance, it is extremely important that archaeologists partially, but not entirely, excavate the critical areas of a site.  In that way, future excavators using newer methods and doubtlessly more advanced technology can glean more data than is possible to do today.

Israel Wayne: Can you tell us about some of the digs of which you have been a part, and if you have any future projects lined up?

Dr. Jeffrey Hudon, Ph.D.: My first excavation was at a site named Ketef Hinnom, just across the Hinnom Valley from the Old City of Jerusalem.  The site served as a cemetery during the final century or so of the Kingdom of Judah and afterwards, during the Babylonian occupation of the region.  It was extremely rich in finds and famous for the discovery of two silver amulets inscribed with the Priestly Benediction (Numbers 6).  These amulets remain the most ancient Old Testament texts yet found (ca. 600 BC).  A Wheaton College student and I found a rare and valuable Yehud (Judah) coin from the Persian Period and I excavated a cist tomb containing a Roman soldier.  I even found the stone arrowhead that killed him still lodged in his chest cavity!  Most of my career has been working at sites in Jordan.  I currently serve as administrative director of the Tall Hisban Cultural Heritage Project.  My boss and the senior director of the project is Professor Øystein LaBianca, who has worked at the site since 1971 with Andrews University.  Hisban is the Arabic name for Heshbon, a city mentioned nearly 40 times in the Bible (e.g., Numbers 21).  We are looking forward to celebrating the fiftieth anniversary of excavations at Hisban next year (2018), which includes excavation teams from Andrews University in Michigan, the University of Bonn in Germany as well as other schools here in America and abroad.  Hisban is a rather unique site in that it preserves 3000 years of history from Old and New Testament times, the Byzantine Period and the Islamic Period as well.  It is an exceptionally rich site culturally, politically and religiously during every period.  Its strategic location, across the Jordan Valley, yet visible from Jerusalem, was recognized by King Solomon, who made Heshbon a district capital (2 Kings 4:19).

Israel Wayne: How would you advise a student who is considering studying archaeology in college? Are there special considerations as to what type of college to look for, especially in terms of one that wouldn’t try to destroy their Christian faith?

Dr. Jeffrey Hudon: Archaeology is a difficult field in which to enter, let alone establish a successful career.  The student must be extremely motivated and resourceful to succeed!  As an academic field, biblical archaeology dramatically declined in the last 40 years, but is now on the resurgence and several Christian colleges offer or are planning to offer majors in the subject.  A small handful of evangelical graduate schools offer advanced degrees in archaeology as well.  Hopefully this number will grow.

Israel Wayne: Please tell us about your doctoral thesis, and why you choose that topic of study. Dr. Jeffrey Hudon: I wrote my dissertation on 2 Chronicles 26, where I correlated the account of King Uzziah’s reign, his war with the Philistines, Arabs and Meunites and his building projects, with the available archaeological evidence.  It was a tremendously complicated project, but very satisfying because I believe I successfully demonstrated that the weight of probability clearly supports the historical credibility of the Chronicler’s narrative.

Israel Wayne: How can people connect with you and learn more about your work?

Dr. Jeffrey Hudon, Ph.D.: I can be reached via these email addresses:

Image by Dimitris Vetsikas from Pixabay