Conspiracy Theories and the Christian 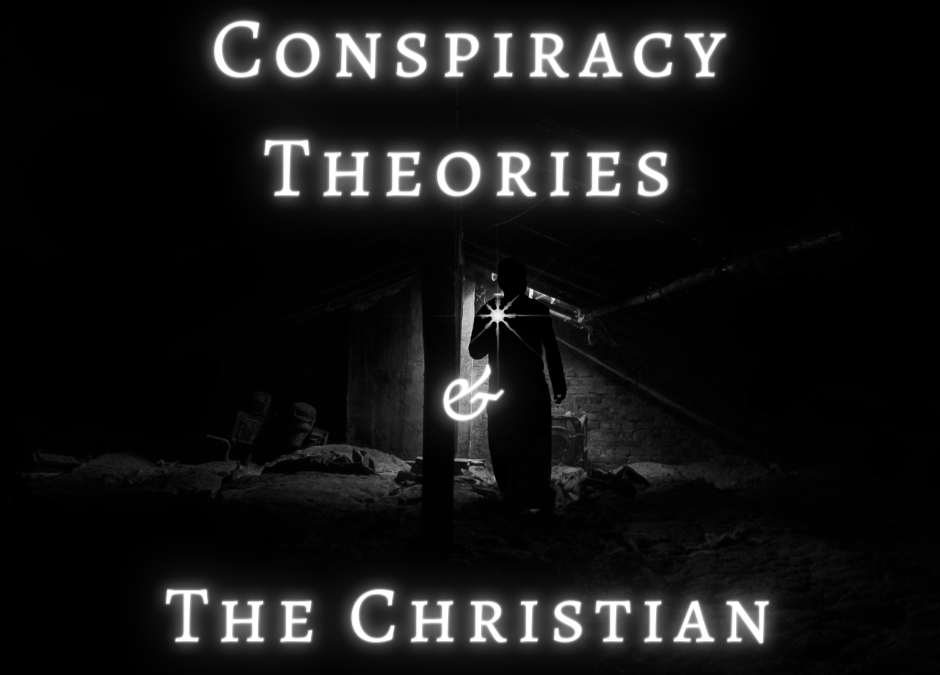 Conspiracy Theories and the Christian

In the past few years, I have noticed a dramatic uptick in conspiracy theories being embraced by people in my social circle (mainly right-wing, conservative Evangelical Christians). The increase has been so sharp, it has caused me to give serious thought to the entire issue, and to ponder what is causing it, and how concerned I should be.

As with any topic, I always like to define terms first. Webster’s 1828 Dictionary says this about “conspiracy”:

That definitely gets us in the right ballpark. The Oxford Dictionary says of “Conspiracy Theory”:

“A belief that some covert but influential organization is responsible for a circumstance or event.”

So, it’s basically bad guys planning ahead of time to do bad things.

How Do Conspiracy Theories Form?

I believe all conspiracy theories arise from suspicion. The motives of certain people are called into question and are not given the benefit of the doubt. That seems obvious, but what causes this inherent trust to be broken?

It seems to me that on a macro-level our society is reeling from a credibility problem. Modernism developed institutions that we were taught to respect and revere from a very young age. A few examples are: Healthcare professionals, clergy, journalists, educators, scientist, politicians and lawyers (okay, did anyone ever really trust politicians and lawyers?!). In the mid-twentieth century, you turned to the news media for unbiased facts that were reported by impartial observers. The thought of that now makes us laugh with incredulity.

Postmodernism, with is deconstruction (tearing down) of cultural structures, has attacked each one of the aforementioned fields and has caused us to believe that nothing is certain or trustworthy in the world. Our experience sometimes seems to verify this.

A Crisis of Belief

It happens at a different place and time for everyone. For some it’s when they realize that Santa Claus doesn’t exist. For others, it’s when they realize the government educational system has lied to them (perhaps about evolution, or history, or any significant life-impacting fact). Maybe it’s when they believe their doctor has his own pocketbook primarily in view rather than their personal health. For some it’s when scientists declare we will all die in ten years from greenhouse gases and carbon emissions (and then we don’t). Worst of all, some have been victimized sexually by clergy, leaving them emotionally devastated and questioning the existence of God Himself.

What ever the impetus for the crisis, there it is. The person can never again go back to the naiveté they had before. Sadly, a new jaundiced cynicism has replaced the previously trusting nature of the individual. The betrayed victim now sees the world through colored lenses of doubt.

When the things that were the most certain in a person’s life are stripped from them, they can lose faith in virtually everything. This can be a scary place. It’s like having both feet firmly planted in mid-air.

The newly disillusioned person can quickly begin to doubt what he hears on the news (especially if he catches the media in a brazen lie or distortion). If scientists are wrong on one point, perhaps they are wrong on everything. If global warming is a farce, maybe the lunar landing was as well, and perhaps the earth is flat. If history books lie to you, maybe John Kennedy was killed by the CIA, and perhaps 9/11 was an inside government job. Before long, it’s entirely possible to slide down the rabbit hole of internet legends and myths and never find yourself resurfacing to interact normally with the people who are still clinging to their Pollyannaish view of life.

In 2 Thess. 2:9, we are told that Satan works through various means of trickery to entice people who are perishing. That makes them sound like victims. Who can blame them for being hoodwinked, right? But then in v. 10, it says, “They perish because they refused to love the truth and so be saved.” That seems to put the blame for their deceived state on their own shoulders. Then it says (v. 11-12): “For this reason God sends them a powerful delusion so that they will believe the lie and so that all will be condemned who have not believed the truth but have delighted in wickedness.”

It’s kind of like, since they don’t want to love the truth, God helps facilitate a deeper level of deception than they were already in. A description like that hopefully dissuades us from having such a heart attitude.

Christians Should Only Ever Embrace Truth

In John 14:6, Jesus said, “I am the truth.” John 16:3 (ESV) says: “When the Spirit of truth comes, he will guide you into all the truth.” Our goal is to align ourselves as closely as possible with that which is true, real, genuine, and accurate, because that is what the God we worship is like.

When First We Practice to Deceive

One of the great ironies of the truth of Scripture is that it affirms that there are conspiracies existing in our world. “Why do the nations rage and the peoples plot in vain? The kings of the earth take their stand and the rulers gather together, against the LORD and against His Anointed One: ‘Let us break Their chains and cast away Their cords.’” (Ps. 2:1-3, ESV)

We are assured that there are powerful leaders who gather covertly to hatch diabolical schemes. The existence of conspiracies is a worldview that most closely corresponds to reality (that makes your head hurt, doesn’t it?!).

Here are some questions I’d suggest for evaluating conspiracy theories in which you may be tempted to believe:

I have seen some people become so entrenched in conspiracy theories it truly harms their mental and emotional health. They can become paranoid and begin to lose touch with reality altogether. I have also seen people become alienated from others and socially isolated because of their eccentric views on disputable matters. Surely that is not a healthy or advisable lifestyle to sustain.

Some people like to process their thoughts out loud when they are considering new ideas. This may seem harmless, but it can cause genuine concern on the part of those hearing it fleshed out. It may be a good idea to keep your more radical ideas closer to yourself until you become more convinced of how everything fits together. Example: “Lately I’ve been thinking the dinosaurs were all abducted by aliens. That’s why they vanished so suddenly from the fossil record!” (This will probably earn you some strange looks from co-workers around the water cooler!)

As Christians, we do not merely represent ourselves to the watching world. We also reflect our Lord. We need to be aware of what kind of impression people are getting of Christianity from our example. Most non-Christians think Christians are tin-foil-hat-wearing-wackos anyway. We want to be careful we don’t justify their caricatures of us by promoting weird and esoteric stories that aren’t well-founded and demonstrable.

With social media, it is especially easy for false information and hoaxes to travel quickly and we can often inadvertently become party to spreading rumors, gossip or just false narratives. A quick search for confirmation from a reliable site will often save us a lot of embarrassment from posting something untrue. If, on occasion, we are snookered into participating in the spread of erroneous information, we should quickly remove the material, try to contact anyone we shared it with to inform them and apologize, and in most cases post a notice on our page that newer, more truthful information has becomes available to us.

People will respect you and take you more seriously if you own mistakes. The person who glibly shouts out all kinds of flaky tales that are proven wrong later will be discounted as a reliable resource for information. That will almost certainly restrict their efforts at evangelism and witness as well.

I believe it is important for all of us to have a few close and trusted friends with whom we can share openly and honestly what we believe and are struggling through. We should seek relationships with people who have a track record of making wise life choices and have stable long-term relationships with others. These are people we can learn from and grow with. We should be willing to consider their input and counsel as a self-check for our own ideas, to help keep us from growing delusional or imbalanced. Obviously, it is possible for us to be correct on an issue and them to be wrong, even though they may be wiser than us in many areas of life, but simply having them in our lives will probably help keep us more grounded and less likely to become destruction in unhealthy beliefs.

Most importantly, saturate yourself daily in the Word of God and spend time seeking direction from the Lord. The Holy Spirit will lead and guide us into all truth if we abide in Him and God’s Word.

Todd Friel of “Wretched” has done two broadcasts on QAnon and Conspiracy Theories that I think you’ll find instructive:

Israel Wayne is an author and conference speaker and founder of Family Renewal, LLC. He serves as Site Editor for www.ChristianWorldview.net.